“We weren’t the cleverest people”: reflections on five years of publishing a magazine written by people with mental health difficulties 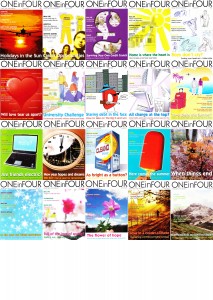 Mark Brown, editor of mental health magazine One in Four  tells some of the secret story of the early days of the magazine

When we first started One in Four people would ask ‘what effect has it had on your mental health, editing a magazine?’ I’ve always thought the least interesting thing about One in Four was the fact that I as its editor experience mental health difficulties.

The idea for One in Four came out of my own experiences of being unwell and unemployed. I had a mental health difficulty but no idea what I was suppose to do with my life. Going forward to 2005, I’d found my way into work through a series of lucky opportunities. Having lunch with my later-to-be colleagues at Social Spider (the small social enterprise of which I am now co-director), knocking ideas around when I asked the fateful question: ‘I wonder if anyone has done a mental health magazine written by people with mental health difficulties?’

The idea floated around for a while, taking shape over cups of tea and greasy dinners. Maybe we could do it; maybe we could get it off the ground. A magazine written by people with mental health difficulties that had high production values, talked about everyday experiences, offered advice and stayed hopeful that life could be better. About a year later I joined Social Spider and we began the process of trying to make One in Four happen.

For a while ‘Mental Health Magazine Project’ as it was then known didn’t even get onto the launchpad, never mind off the ground. We applied to a few funders and were turned down: ‘We’ve funded magazines before and they’re never sustainable’ they said.

The answer came from a surprising source: a supplement on mental health that fell out of a Sunday newspaper. Looking at the small print we saw that it had been funded by a charity called The Charlie Waller Memorial Trust. A recently formed family charity, CWMT was set up in memory of Charlie Waller who took in his own life at a young age. Summoning up all of our charm and politeness, we sent the trust a letter outlining our plans.

To our surprise, they sent their representative to meet us, a wonderful, straight-backed and soft-spoken gentleman called Brigadier Michael Lord. The Brigadier took a shine to us and suggest that CWMT might be interested in putting some money into some research to see if there was a need for a magazine.

At the same time, using our googling skills we’d found that apart from Comic Relief, who had already turned us down, there weren’t many grant-making organisations giving grants for mental health related projects. The South London and Maudsley (SLaM) NHS Trust Charitable Funds was one of them.

We went to speak to them. We told them that we wanted to create a pilot edition of the magazine, after doing some focus groups with people to see how it should work. We told them CWMT were quite interested in putting in a little bit of money. When they suggested we apply for funds we, in the manner of people trying to raise money for a feature film, went back to CWMT and told them that SLaM Charitable Funds were interested… Eventually the two organisations decided to split the funding of focus groups, some participatory workshops and the actual writing and printing of a pilot issue of what would become One in Four between them. We were in business…

‘We’re not the cleverest people in the world’

In an ideal world we’d have been able to print thousands of copies and ship them to whomever wanted some, so that they could go in libraries, GP surgeries, hospitals and community venues, waiting for people to pick them up.

The money just wasn’t there. CWMT didn’t have that kind of money, SLaM weren’t sure. We faffed around writing business plans, and making projections whilst time was ticking on the idea.

So we took a risk. A massive risk.

We used our own money, money that we as a tiny company really didn’t have, to produce the first regular issue without any funding at all.

Our risk paid off; SLaM Charitable Funds offered us a commercial loan on the basis that we would pay them back with money raised by selling the magazine in bulk to organisations and the NHS. CWMT chipped in with three years of support with a vital slice of funding.

When we finally signed the papers for the loan in the admin block of the old Maudsley hospital, you could almost hear the sound of banks collapsing. We set off on the course of trying to make a success of a magazine written by people with mental health difficulties, run as a business, at the beginning of the worst financial crisis ever.

Our model had always been to try to sell copies of the magazine to people who could afford to buy it, like NHS services or big charities, so that they could distribute it to people who couldn’t afford it. A model we tried to develop at the beginning of the largest contraction of public spending in decades.

So there we were, trying to sell a magazine written by people with mental health difficulties to organisations that didn’t think they had enough money, with a loan repayment schedule hanging over our heads while also working to keep our social enterprise afloat… Being open about my mental health difficulty was the least brave thing that I did during the development of One in Four.

In our first regular issue, published in summer 2008, we ran writing by Seaneen Molloy, the award winning mental health blogger.

From autumn that year we employed as staff writer Laurie Penny who left us for the lofty heights of an international career in journalism and politics.

Other funders, such as the Wates Foundation and, later, Comic Relief supported us with grants. But we were still struggling to sell copies to organisations, a situation that worsened in 2010 with the change of government which left organisations desperately cutting things from their budgets. Things like subscriptions to magazines written by people with mental health difficulties.

Starting a magazine is a risky business. Keeping it going is even riskier, especially for skint outsiders like we are. There have been times when we’ve asked ourselves; ‘can we keep this thing running without going bankrupt, missing months worth of sleep or completely missing seeing any people outside of our colleagues for weeks on end?’ There’s never been a time when we’ve said to ourselves ‘what’s the point of keeping going?’

Over the last five years we’ve been able to commission people to write what for many was their first piece of paying journalism. We’ve had many tight scrapes and times where we’ve had to pay print bills instead of taking wages. We’ve not always been able to pay as quickly as we’d like but we have managed to pay writers with mental health difficulties to write about mental health.

There’s been a few times where we nearly haven’t made it, running headlong into the fact that there’s very little money in mental health.

We’ve seen other similar projects, some inspired by us, try and fail to make sustainable businesses from writing about mental health.

Eventually SLaM agreed to write-off most of their loan and convert it to a grant when it became clear that the chances of getting the volume of sales from the NHS wasn’t going to happen. As we enter our sixth year we’re sailing forwards with no ongoing grant funding, supporting the magazine through the other work our company does.

If you’re lucky, you’re reading this because an organisation you know or a place you visit believes in what we do enough to buy copies to distribute. If you aren’t, you’re one of our individual subscribers, for which we thank you. (or if you’re reading this online, why not subscribe? It’s only a tenner a year!)

For details of ways for organisations to subscribe to One in Four in bulk (subscriptions start at £60.00 for 10 copies of each issue for a year), see here.

2 Responses to “We weren’t the cleverest people”: reflections on five years of publishing a magazine written by people with mental health difficulties