Read One in Four articles online

An online archive of articles that have appeared in One in Four magazine and web-only exclusives. If you like what you read, there’s plenty more in each quarterly issue of One in Four. 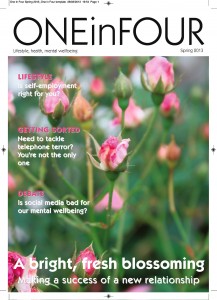 If you’re terrified of talking on the telephone you might be surprised to find you’re not the only one.

I’m the boss of me (available online)

Is self-employment a good idea if you experience mental health difficulties? 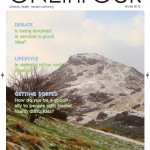 12 You’re gonna need someone on your side (available online)

16 In defence of fun (available online)

Without fun and pleasure, life is just surviving 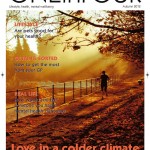 Just how do you help your GP to help you?

What do our pets do for our mental health? 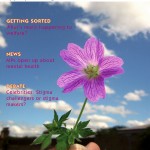 The Flower of Hope

Just how do we keep going when things look tough?

In a welfare state?

Editorial: The Year of Keeping Going

One in Four‘s Editor Mark Brown on sticking it out through tough times.

The Year in Review

Editorial: It’s Up to Us

One in Four‘s Editor Mark Brown on holding on to hope.

Is Stigma a Useful Idea?

Just what is stigma, and is it helpful?

Seven steps to making a change

Full article examining ways to start and run your own projects or ‘How to change the world, Do-it-Yourself style!’

So what about this Big Society thing?

An online exclusive. Mark Brown discusses what the Big Society might mean for people with mental health difficulties

Editorial: Keep on keeping on

Funny in the head?

Do you think mental health difficulty is funny?

An online exclusive. Mark Brown presents a simple guide to setting up and keeping a blog.

One in Four two years on

In a lonely place

Loneliness is a more common problem than you’d think

What the election means to you

Mental health and wellbeing in the general election 2010

What do people with mental health difficulties make of the way that campaigners portray them?

A bit on the side

Medication side effects and how to understand them

“Everybody has a role”

Editor Mark Brown on the first birthday of One in Four

Side effects and the city

Medication, relationships, side effects and sex