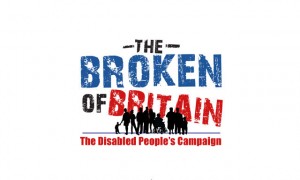 The Broken of Britain is a new protest group created by and for disabled people. It’s a good example of what can get started if a few people with similar ideas come together and find ways of using what they have to make a difference. Regardless of whether you agree or disagree with their campaign, it’s an excellent example of the way that an idea can turn into a living, breathing thing

“Our aims are simple,” says Kaliya Franklin, better known to the internet world as BendyGirl, “Oppose cuts to benefits and services which affect disabled people and fight for increased disability rights.

“All it took was for one person to speak out against the injustice of the cuts for others to join with us and say ‘me too’. After the announcements in the Comprehensive Spending Review I made a video letter to the Prime Minister condemning the removal of the Higher Rate Mobility Allowance from state funded care home residents. I put it on video sharing site YouTube and there was such a great response that I made another video to the disabled people of Britain and asked them to share their stories with me to highlight the disproportionate impact of these cuts. Our sister organisation Carer Watch and journalist, Rhydian Fon James, had similar ideas about the need for a campaign based primarily online to allow the majority of disabled people to protest and The Broken of Britain was born.

“We quickly realised that many people wanted to get involved and the best way to highlight these problems was through individual stories so appealed for people to send them to us. The rest we are working out as we go along!

“There is a vast array of individuals and groups with physical disabilities, learning difficulties and mental health difficulties already using the internet to work together so at Broken of Britain we work with a wide definition of disability to include and complement all those groups. We are a user-led organisation, independent of all political parties.  We believe that disability is a subject too vast andbimportant to be directed by political ambitions. We make use of the skills disabled people have in using the internet and specifically social media to lobby politicians and the mainstream media to give us the opportunity for our voices and viewpoints to be heard in a way not previously possible.

“We are collecting as many individual stories as we can to be used as case studies to highlight that the cuts are going to affect ordinary disabled people and not the ‘benefit scroungers’ so vilified by the press, public and politicians of all parties. We have a forum to allow disabled people to come together and decide upon the campaign priorities. We have a blog to allow us to share all our stories.  Our main website is currently being developed. We are welcoming volunteers, so for anyone who would like to be involved, can visit our forum and participate in the formation of our staff structure.

“We hope to become a more formalised organisation in time and look to provide support for disabled people to work on a part time basis from home. For now we feel our strength as a lobby group comes from being a collective of people with the same overall aims. The way people are organising themselves rapidly using modern technology shows just how much a diverse group of people can achieve once they decide to work together towards a common goal.

“If you feel that a situation is unjust and needs to change then in all likelihood others will feel the same as you. ‘Me too’ is much more powerful than ‘just me’ Alone we whisper into the wind, together we become the wind of change.

Read articles from the current issue of One in Four

2 Responses to The Broken of Britain