Mental health – Celebrities, challenging stigma and the ‘then what?’ moment 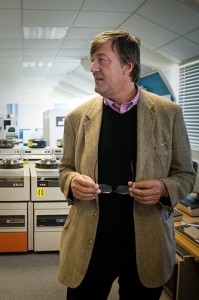 A photo of someone I'm not as funny as

We talk about stigma a lot when talking about mental health difficulty, or at least some of us do.  A stigma is, strictly speaking, a physical mark of disgrace.  It’s something inflicted on a person’s body by a society that is understood by that society both as a punishment and a warning.  The thing is, mental health difficulty is something that happens in your head.

Erving Goffman described stigma as “The phenomenon whereby an individual with an attribute is deeply discredited by his/her society is rejected as a result of the attribute. Stigma is a process by which the reaction of others spoils normal identity.”

So what is it we’re stigmatising? What is it we’re spoiling? I think there’s two possible things we’re stigmatising: the behaviour of an individual and the way in which their condition affects their life. In having a mental health difficulty there is the direct consequence of what you experience and then, following from that, there is the effect this has on you, your life and the lives of those around you.

At present we’re at the beginning of a concerted effort to attempt to reduce stigmatising behaviour towards people with mental health difficulties.  National multi-year campaign Time to Change is both creating the impetus of this wave and riding it by funding grassroots anti-stigma activities, promoting positive media images and trying to drive up ‘social contact between people with mental health difficulties and people who do not.

The thing is, sometimes having a mental health difficulty is awful. Or embarrassing.  Or disruptive. Or can make you unemployable. Or turns your house into a mess. Or any of the other unpleasant things having an impairment to your mood, behaviour, thoughts, perceptions or motivations might cause if you don’t have some sort of aid to offset it.

I’ve been wondering whether it’s possible that we are managing to obscure the real implications of having a mental health difficulty by focusing on ‘accepting the person’ while, as some would claim, erasing the circumstances under which they live?  And, as a result of that, are we failing to focus on what might reduce the impact a mental health difficulty has on the lives of people by being unable to see what adaptations and modifications might be made to situations?  In other other words, are we focusing too much on the idea that individuals are ‘judged’ by society and not enough on what it actually is that’s being judged?

If we step away from the personalising and relating to own circumstances in that argument, we are left with the core idea that what people are being asked to accept about mental health difficulties is that people have them, but aren’t being asked so much to consider what the implications of those difficulties and impairments actually are.

Accepting a person, ignoring a situation?

Mental health difficulty is a series of impairments.  These impairments have real implications for what any individual needs to live a viable and fulfilling life.  At present we are, to my mind, extremely bad at addressing that impairments cause needs which in turn cause outcomes when those needs are not addressed.

But where are they a transitional stage on the way to?

For me, what’s holding us all back is being unable to stake out the ground for an exploration of what impairments mental health conditions cause and what we can do to assist and mitigate against those impairments.  I think this is the natural next stage after our current period of foregrounding the anti-stigma struggle – the shift from saying ‘accept people with mental health difficulties exist’ to ‘accept that we need to make changes to the way things are so that people with mental health difficulties are no longer excluded’.

Mark Brown is the Editor of One in Four magazine.  He is @markoneinfour on twitter

4 Responses to Mental health – Celebrities, challenging stigma and the ‘then what?’ moment