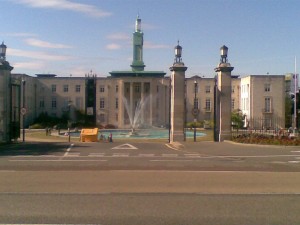 As some of you might know, we’ve been working on a thinkpiece funded by The NHS Confederation into what Big Society ideas might mean for mental health.

As we spoke about at our conference last month, the present moment is one that is filled with both challenges and opportunities.  The ‘big’ idea of the ‘Big Society’ is that local people are best placed to find solutions to local problems.  This comes at a time where shake-ups in local councils and the NHS are leading to reorganisations, repositionings and changed priorities and where money seems to be evaporating more quickly than the spray from Waltham Forest Town Hall’s beautiful fountains.

Part of the argument that we’re making in our thinkpiece, out in July, is that organisations, communities and public bodies are going to have to find new ways of making things happen if we hope to meet the same needs that we met previously.  Another part of the argument is that getting organisations and individuals together and thinking about we want to happen is the key to making sure that innovation continues in this difficult time and that, on the ground, people still have opportunities to have their needs met.

With that in mind, we did something quite simple in our home borough of Waltham Forest.

We called a meeting.

We contacted everyone that we could think of who might be interested in making sure that Waltham Forest is a borough that looks after the mental health of the people who live here and said: ‘We’re organising a meeting to see what we can do together in mental health and what we want to happen next.’

What we’ve seen is that areas where voluntary, community and public sectors work well together are areas where more stuff gets done.  I haven’t been able to find a better term than ‘making stuff happen’ to cover the complicated interaction between talking, planning, plotting, persuading, politicking and advocating involved in getting something from being a nice idea to something that actually happens.  Stuff seems to happen when you get people with ideas and people with knowledge together and get them talking (especially if some of those people have resources too!)

We intentionally didn’t set an agenda apart from having a chat to work out what we could do together.  We weren’t inventing anything new, just trying to get some people together in a new way.

So far, so much like rounds of other meetings familiar to people who have been involved in engagement exercises.

Then we got onto the interesting things: what can we make happen, how do we do it and who might help?  To do that we had to shift from the kind of meetings that we’d been used to, where discussion focused on what the council or the NHS should or shouldn’t be doing and into seeing ourselves as independent of that and able to decide to do what ever we wanted.

Once we got away from the equally import conversation about what the public sector should be providing when people are ill, we got onto the question of how we could make stuff happen to help people be well.  What emerged was that there was already lots of extremely interesting stuff happening in the borough.  What also emerged was that there was work to be done in making a strong case to the local authority for the importance of mental health as a public health issue but also a case that gave practical information and suggestions.

Lots of ideas got knocked about, included going forward with a directory of local groups, organisations and services.  This would have a dual purpose of making people aware of those groups but also providing a practical resource to begin engagement with local GPs.  Another included widening awareness of our newly minted forum to get larger amounts of people along and where that wasn’t possible talking to people and finding out their ideas, wishes and fears.  A third was the development of a vision for what we, people with mental health difficulties and voluntary and community groups, would like to see in the borough.  We always expect local authorities to know what should be done, but Big Society ideas suggest that we might be the ones with a better and more useful vision.  Coming together on an equal playing field as people who want to make stuff happen is the first step for that.

A fourth and even more exciting idea that came across was that through talking to people, we might be able to find ways of making small community level projects happen.  One attendee said that she’d love to put on a regular group for people to meet and that all she’d need was a venue.  It transpired that there was a newly launched community hub that might be able to provide it.

This was the important aspect of what we were talking about; our ability as individuals and organisations to find solutions to problems and meet needs by working together, networking and doing that slightly messy yet vital business of ‘making stuff happen’.

I know they’ve been happening in some places for years.  Alisdair Cameron spoke at our conference about how far advanced this method of making stuff happen is in the north east of England.

As we filed out and past the wonderful fountains the conversations continued, as I hope they will for months to come.

If we’re going to make sure people have the best mental health possible, these are the kind of conversations that we need.  I’m glad we managed to start one here.

How are things where you are?

Mark Brown is the editor of One in Four magazine.

Subscribe to One in Four for £10.00GBP per year