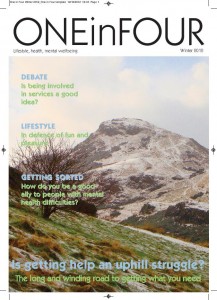 As we go to press Chancellor George Osbourne has just announced in his Autumn Statement on December 5th that austerity will continue in the UK for at least another 5 years. Cuts to services, economic slowdown, worries about rents, jobs and changes to benefits, all collide to make for a somewhat shaky sense of security. Many of us will look back on 2012 as a difficult year.

The issue of mental health found itself in an interesting place in 2012. In a broad sense, 2012 has been the year when mental health went mainstream, or at least certain aspects of it. As mental health tweeter @sectioned_ notes on page 20, mental health is finding its place within the wider issue of disability as a niche political issue. As we see in our coverage of the Mind Media Awards on page 19, mental health is also breaking out of its dull-but-worthy ‘issue’ box and finding its way into mainstream, prime-time programming. The Commons debate in June where MPs discussed their own mental health difficulties was a significant event, as we noted at the time, as have been the increasing number of celebrities ‘revealing’ their struggles with their own mental health. Channel 4′s ’4 Goes Mad’ season stoked a short-lived flurry of discussion around mental health. The NHS mandate (see News) also can be seen as a major step forward, with the government specifically asking the NHS to give mental health the same esteem as physical health and to bring things like waiting times and choice in mental health in line with experiences in physical health. On one level, 2012 has been a year of progress. The issue of mental health has managed to get into the high-flying world of Westminster politics and air-kissing media. People have been talking about mental health, but have they been talking about the right things?

Changing law and fighting for the things that people need to have a good, safe and fulfilling life is vital, but it’s not something you can do all of the time. We can’t stay angry and afraid from the time we get up to the time we go to bed. Sometimes we need to have fun. For some of us the Olympics and Royal Wedding presented a welcome respite from worry.

Our lives are a constant interplay between big events that touch the lives of millions and the tiny things that just affect us, our communities, our families and friends. It’s important to remember that as much as it’s important to take on the big fights and big issues; it’s also important to nurture the things in our own backyard, too. Fun and pleasure isn’t an optional extra, nor is companionship, love and fellow-feeling.

If there is one thing that became clear in 2012 it’s the fact that people with mental health difficulties need each other, and our allies, more than ever.

This editorial appears in the Winter edition of One in Four magazine, out January 2nd. Mark Brown is @markoneinfour on twitter

One Response to How will you remember 2012?